As mentioned before, a balanced and healthy tokenomics is currently the top priority for Venus because it determines how Venus multiple participants will collaborate and support the development of the protocol. A good tokenomics model aims to create a selling point where the protocol growth, sustainability, and safety take priority over individual stakeholder objectives.

Based on this principle, we comprehensively considered the opinions from the community and conducted multiple rounds of discussions with external risk control teams and tokenomics model design experts on this basis, and finally formed the tokenomics model framework of Venus.

Venus Vault is a mechanism that locks XVS to improve the system’s anti-risk ability and distributes staking rewards. In addition, only XVS deposited in the vault has the right to govern and can capture most of the income of the system. This is very similar to Staking/Delegation in the PoS network.

XVS deposited in the vault:

In short, the only XVS deposited in the vault can get full rights and interests.

XVS deposited in the vault will be subjected to the following rules:

VRT can also be deposited in the Vault and receive an APY of 3%. The income is paid in VRT. There are no restrictions or unlocking periods for VRT. After the 12 month VRT transition period, the undistributed VRT tokens will be burned.

With the launch of the Venus vault, the original incentive policies related to XVS deposits will also change:

The Income Model and XVS Token Economy for Venus Protocol

All income will first be deposited into Venus’s treasury account. The future sources of income are: 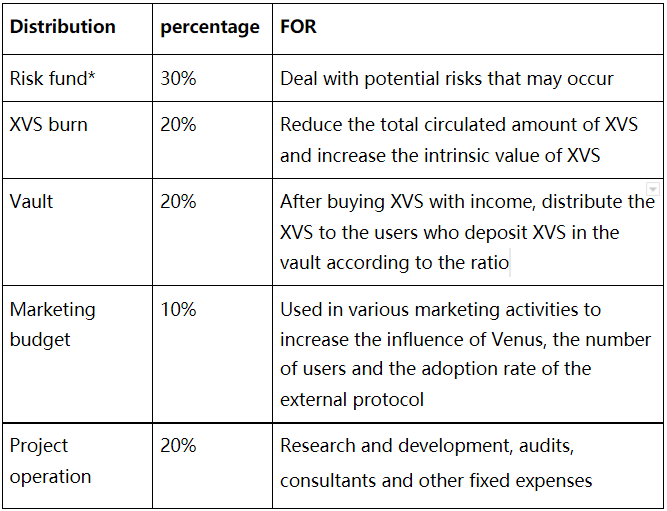 1667×511 22.8 KB
*The risk fund is the first fund pool used for compensation when a shortfall occurs. When the ratio of the amount of the risk fund to the total deposits or the total amount reaches a certain level, and the assessment is sufficient to deal with potential risks, the income distribution ratio to the risk fund can be adjusted.

Although we will try our best to prevent the occurrence of the shortfall, we should have a set of potential risk response mechanisms. The mechanism we recommend is:

The risk fund will first be used to pay for the shortfall. In the very improbable case that it is not enough to cover, the remaining part will be taken care of by the following two schemes:

If all the three above are drained, a bond token will be issued to cover the shortfall. Most of the income will be used to repay the bond first. This bond system will be developed in the future.

After the Venus vault program is launched, VRT has two primary uses:

The operational time of the above functions is 360 days after the vault is activated. After that, neither the redemption function nor the income distribution will be available, and VRT will no longer have practical uses.

With the above said, we do not expect this doc is the conclusion, but a good start. Venus Protocol is born to be a dynamic creature who will grow and change tirelessly. It will become more assertive with tighter cooperation, swift adjustment, and persistently hard work among all the stakeholders in the decentralized world.

Thanks to all of the community for their support along the way. We believe that Venus driven by the new tokenomics model will be more robust, balanced, and achieve much faster growth. We are also recruiting more talents to accomplish this, and we look forward to seeing you and us witness the rise of the “New Venus” again.

NO. This is the proposal 2 that everyone has voted NO to, with a lower bough back ratio even though XVS is at a higher price now (the only acceptable ratio is the price of VRT/XVS right before they announcing the revoke of tokenomic) . What you call 2 use case for VRT is just a bough back plan using XVS at lower apr than XVS. And the part of use 10% user fund to cover shortfall of the protocol, is this a joke? If short fall happen, XVS lost it value and you want staker to lose another 10% on top of that plus the inflation of new minted XVS of those can’t cover it?

If you don’t want to listen to the community recommendation of a multi-token, that actually works with other protocols, then at least don’t force us to have to lock it away for 12 months and CONSIDER OFFERRING a better rate than 12000:1 and a better APY than 3%. That is just rubbing salt in the wounds. I don’t expect you to offer 1000:1 but at least consider the history of the protocol and provide a better offer if you REFUSE to actually implement the community’s suggestion of a multi-token approach.

I really like the new tokenomics. In my previous comments, I said that vrt will kill xvs, unfortunately it’s sad, but this is the truth. If vrt survived, he would steal from the market value of XVS. n other words, the extra income we would gain from vrt would be lost from xvs. In addition, vrt will give to the platform security damage etc. Simple is always best.

The only thing I don’t like about the new tokenomics is the 10% liability for xvs vault depositors. I think this figure is high and should be reduced to 5%.

Now the team does not have the ability to spend more time on vrt and venus nft.

This is a problem left by the irresponsible JL

Most people who are struggling with vrt issue are because they bought vrt or they don’t have xvs.

The simpler the plan, the faster the development of Venus

Three months have passed, and there are still people questioning for the benefit of vrt. We don’t have time！We must immediately solve the problem in the fastest way.

The market waits for no one, it must be restarted in the simplest way as soon as possible.

We need to grow fast.

If Venus can be great again, no one cares about vrt

then why lie/mislead about it up till now, could have just said so right when they took over (it’s to avoid backlash on SWIPE if you cant tell).

For those who still doesn’t realize how manipulative this move of the “new team” is (which is the real problem here):

This is the right direction, very good and professional. I feel very comfy with the new team.

This is the best solution, period.
XVS takes a tokenomics that is very strong.
Regarding VRT: converting VRT into XVS and still making sure that additional XVS does not affect the protocol negatively is really brilliant.

People who bought VRT still gets a price higher than they bough and airdropped people has no costs incured. So in my opinion no big deal.
We all want VRT to rise in price(i did not sale mine) and to me it does not matter if the money comes from VRT itself or the XVS exchanged for VRT.

The price action of XVS says the tokenomics proposal is very well received.
That’s just me and what do i know?
DYOR all my friends out there.

These issues represent deeply concerning problems that compound the other governance issues, which include the inability of vXVS holders to vote and the 600,000 XVS developer wallet that controls every proposal.

For new investors, I strongly caution you to thoroughly examine this protocol before investing. They have a long way to go, and there are other defi loan platforms in the space.

What matters is the amount of devs we have, and the amount of effort they apply to the protocol. Time in this is really quite insignificant. People know venus. Binance can vouch for venus, and primarily, we are defi, so its not a purely speculative asset, but one where people go if there is high returns, safety and functionality.
We dont need to rush, we need to build what can stand for a long time, and function in ways that beats out our competitors. VRT had a great use case, and even if team disagreed, they should have commented why, so that everyone could rationally get behind it. They brute forced it.

No. VRT is becoming nothing. I agree: The team is ignored the community vote to use VRT in the protocol, further proving that this is not a community project.

NO. This is against the community and majority voting. Majority if Venus loyal old members are in favor of VRT to make it the part of Venus protocol. All gone well but now suddenly all changed. This is a cruel decission to be honest and MUST not be implemented.

We’ve spent too much time on debating the use of VRT and if we decided for a direction then we should move forward as soon as possible. Clearly the former team haven’t planned thoroughly before the VRT airdrop and I agree we should take a fresh start. Let’s focus on XVS!

I would like to see why VRT couldn’t be implemented in the protocol. Why is it not feasible? Community has been asked to choose the direction and community decided to choose the multi token approach. I am OK if there is really no chance to implement VRT but if there is one, team needs to follow the decision of the community. Trust is the most important asset and team has to prove that by being transparent and show why there is no chance for VRT otherwise there will be too much room for speculation which could ultimately harm the project.

The Venus Team entirely ignored the Community Vote. Why did they even ask us to vote and state our opinion???

It sounds like the Venus Team dumped their VRT tokens a long time ago and screwing everyone else.

What a joke - there is nothing about community voting about this project.

No talk about VAI remove the mint fees and let it become like Venezuelan dollar.

and the reason which you can find on telegram:

“From what I understood, It seems like the original smart contracts were never made so that we could include 2 different tokens to be distributed without having to recode the whole market distribution mechanism which, would have brought way to much potential security issues. The team won’t take such a huge risk with user funds.”

ok
so we can just expect more tokens added and that is it - other things to hard and no $ for audits; i wish you all good luck with this…

Why the VRT solution is a BIG mistake? Unless the team can show proof that it wouldn’t work along side XVS. There are allot of people like myself that only stacked up on VRT when DANNY gave assurances it was here to stay! Is he not the voice of the team? It’s not ok to mislead people! There’s is allot of money at stake… and this is not a game…“oh, my bad” isn’t a answer and honestly that hasn’t even been said. We truly can’t believe a word out of any of the admins mouths and once trust is gone, so is the project. For the people defending this project, it’s one thing to get rid of it and be transparent from the beginning… but to draw it out and give community assurances that it’s a going to remain, and then pull the rug! I know there are people somewhere profiting big from these decisions…JUST NOT THE COMMUNITY! They only care about the whales… no different then politics! Wouldn’t be surprised if the price was suppressed to make 12000-1 sound at least a little appealing! Very little happens by chance in this space! Need to go back to the stgeshow all this happened

Finally last week its said VRT is coming, ppl started buying VRT, everyboday happy, promise of 2 days to show up tokenomics is delayed a week and then silently a post comes in front that VRT is dying in 365 days.
What to say here? No words, literally no words…