How stable is Vai? CAST your vote!

How stable is Vai?

The votes are in and it is not looking good!

Even more sad that VAI is again 1.25% down since yesterday…0.7 here we go again…

Another day, another low…

Some guy minted 388K VAI and swapped them for BTC through BUSD actually crashing the peg once more.

I need a voodoo doll of this person… 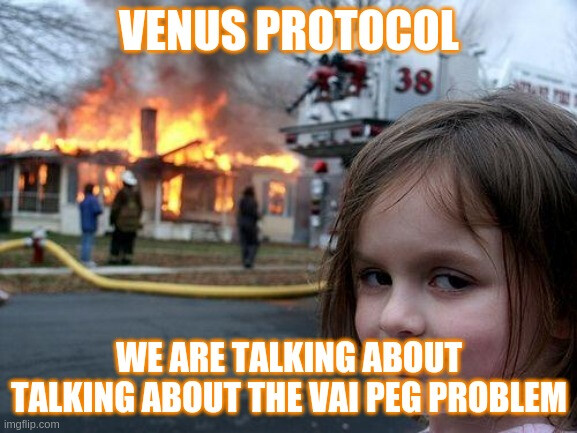 there is no community, in the telegram group there are 26k users and 25k are fake, they have 123k follower on twitter and 100 like…they’re just taking time but they have no idea how to fix it. I have sold all my vai when it has retraced, maybe starting spam every day on twitter can change something , at least you will be able to warn people how this project is.

Sad but true, only 9 votes on this poll says it all!

“Looks like a joke” is in the lead will be closing the vote at the end of the week!

Looks like a joke this chart says it all!

@fat
[Irony on]
Don`t be so negative!
We just need cascading Announcements!!
Those two announcements (the first that they noticed the problem) and the second (saying eventuelly they will try to stop the minting process) causes a raise in price of nearly 10cents every time.
So we need the team to make 3 to 4 cascading announcements and we are at 1 USD…
And just continue with those announcements to keep VAI stable!!!
[/irony off]

Would be nice if the world would work like this…
But in reality we will see new lows soon, you are right and the next “announcement” without a fast follow up with actions will just do nothing I guess.

They said they where going to stop the mint while they where working on a plan, how hard is it to issue a proposal just to do that? Saying their going to do it calmed the market then not doing it within a reasonable time makes them look like liars.

sad but true… but as this stupid SXP proposal was introduced, they pobably need their 300k XVS to throw it on the against side, so they can not bring up a new proposal, because they would not be able to vote with those XVS then (if I understood that right).

don’t forget the team’s xvs can only be use on the winning side to pass the VIP, not for manipulate the vote (at least that’s what they promised). But we can see the team has no integrity (with VRT proposal) so they may do just that.

They now have a chance, almost 12 hours have gone past and they haven’t issued a VIP.