The vault that investors have been waiting for a long time has finally arrived. While many people think that the rise in XVS will start with the vault, I’m hopeless about it. The reason is that the problem creating sales pressure on XVS has not been resolved.

Next year, 3 million XVS will be sold to pay off the platform’s debt. On top of that, it is necessary to add the number of XVS obtained from platform supply revenues in a year. That’s not enough, plus +1 million XVS will create selling pressure for the year after the vrt-xvs change. In other words, approximately 5 million XVS may be sold in the next 1 year period.

Neither the vault nor the 5-10 million dollar purchase plan will be enough to resist all this selling pressure.

We all know that the movements of coins are formed by the purchase of whales. No whale in their right mind would waste time on a coin under such selling pressure.

Unfortunately the BSC team’s plan to sell xvs to save Venus, will continue to hurt investors who trust Venus for a long time!

I have expressed my objections on this subject in the thread I opened earlier in this forum and tried to explain it over danny telegram. However, they insist that these 5 million XVS will not create sales pressure and that the changes made to the platform will be reflected in the price over time.

To be honest I don’t think the BSC team care at all about the xvs price, their only thought is to get the platform up and running. They are not investors like us or they are not loosing money like us and are only interested in keeping the platform running.

But even for the new team to plan to sell xvs and pay off the debt, the price of xvs has to increase. XVS are getting worthless against eth and btc with each passing day, debt is increasing and this plan becomes impossible to implement. We are in a vicious circle like a snake swallowing its own tail.

I hope the new team realizes this vicious circle and looks for alternative plans to pay off the debt instead of selling 3 million xvs. You will see how the price of XVS will skyrocket as soon as this 3 million xvs sales plan is abandoned. Otherwise, we may see lower prices that you do not expect in the xvs price.

I would like to see Binance step in to rescue Venus. It is still the leading lending platform on BSC and it needs to be saved. When Binance is giving $1 Billion for BSC projects, why can’t they rescue Venus with 1/10th of that amount?

It seems a long story, the better way is issue a bond and no selling XVS just like before said.

The problem is who is the leader of the program or let the community to decide and make the decision.

The serious point is where is the community?

you just summarized all my feelings and fears. This approach new team has is in a way worse than what was done by JL building castles in the sky… Priority nr 1 shall be attracting new investors, so this debt problem can be solved (if they need to solve it anyway… but that is different topic). Noone who has money and is sane will invest in XVS right now. Vault gives around 20% and it will go down each day with more XVS locked… If I look around for different DeFi APY - Trader Joe on Avax has now 37% + 30% rewards on Joe coin. Benqi is constantly over 80% with spikes to 110%. These attarct new investors and go up… XVS - zero rewards on collateral, vault with close to nothing rewards, whole platform hard to trust if you read something about its past. Only way to attaract new investors would be with juicy rewards. Then selling some XVS on market to repay debt can go under the radar in bigger volumes. If we continue like this, slowly everyone will get liquidated or just repay the debt and sell XVS in loss.

After reading your post I have sold all my XVS

The plan was stupid at the time,this plan is closely related to price. The cruel reality is that after selling 3 million, it is not enough to repay the debt.
The team obviously has no good way to increase prices. Compared with the old team, their hype ability is very poor.
Although the rank is 302, they are also indifferent. Everything is quiet, obviously the price does not respect xvs holders who insist on 6 months
It’s hard for understand that we have buybacks, burns, and vaults, but it’s worse than August and September
This is usually very desperate, you don’t need to go to the moon, but you have to give everyone some hope in the price

I’m not selling. I’m buying more. This price is a good way to flush out those without conviction.

there where some liquidations 16 days ago.

All the ETH has been paid back at least.

but I think 2 wallets adresses were involved, do you know the other adress ? can’t find it in any post/blog

but yes… it is very confuising… 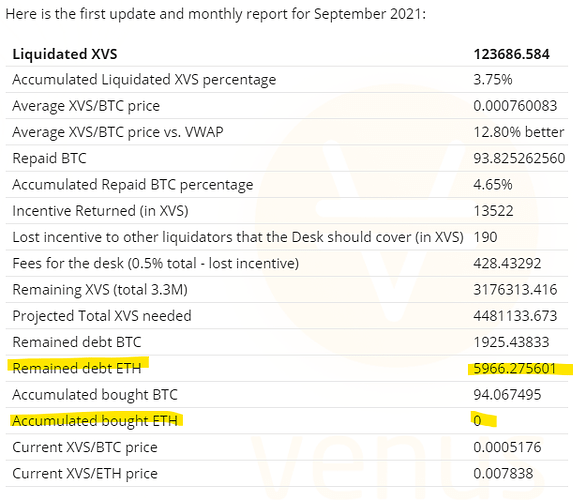 you are a master analysing the blockchain

really hard for average users , any tutorials or hints to begin learning?

I mainly use yieldwatch and manually look through bscscan. There are fair more advanced people than me imo.

Everyday it is making a new all time low against BNB.

XVS/BTC also looks like it is on the last support level.

VENUS team need to have a clear roadmap, and update people in a public forum and not hide everything on telegram.

XVS emissions should be reduced. The last major reduction was on May 16.

VRT swap has still not been implemented, after over 4 months.

I can be patient but need updates to be assured that the developers care about this project otherwise there is no reason to hold XVS.

definitely the forum has been abandoned by the team