If an underlying token can already be deposited on Venus, the liquid staking representative token should also be accepted as collateral to maximize Venus’ total addressable market.

Leveraging staked tokens is vital to DeFi. Traditional financial markets already offer leveraged products and derivatives with notional values many multiples more than the market value of the underlying assets. DeFi needs to catch up to this capital efficiency to be a competitor in the global economy. Locked value in staked native tokens need to be able to tap the additional layers of DeFi as collateral: 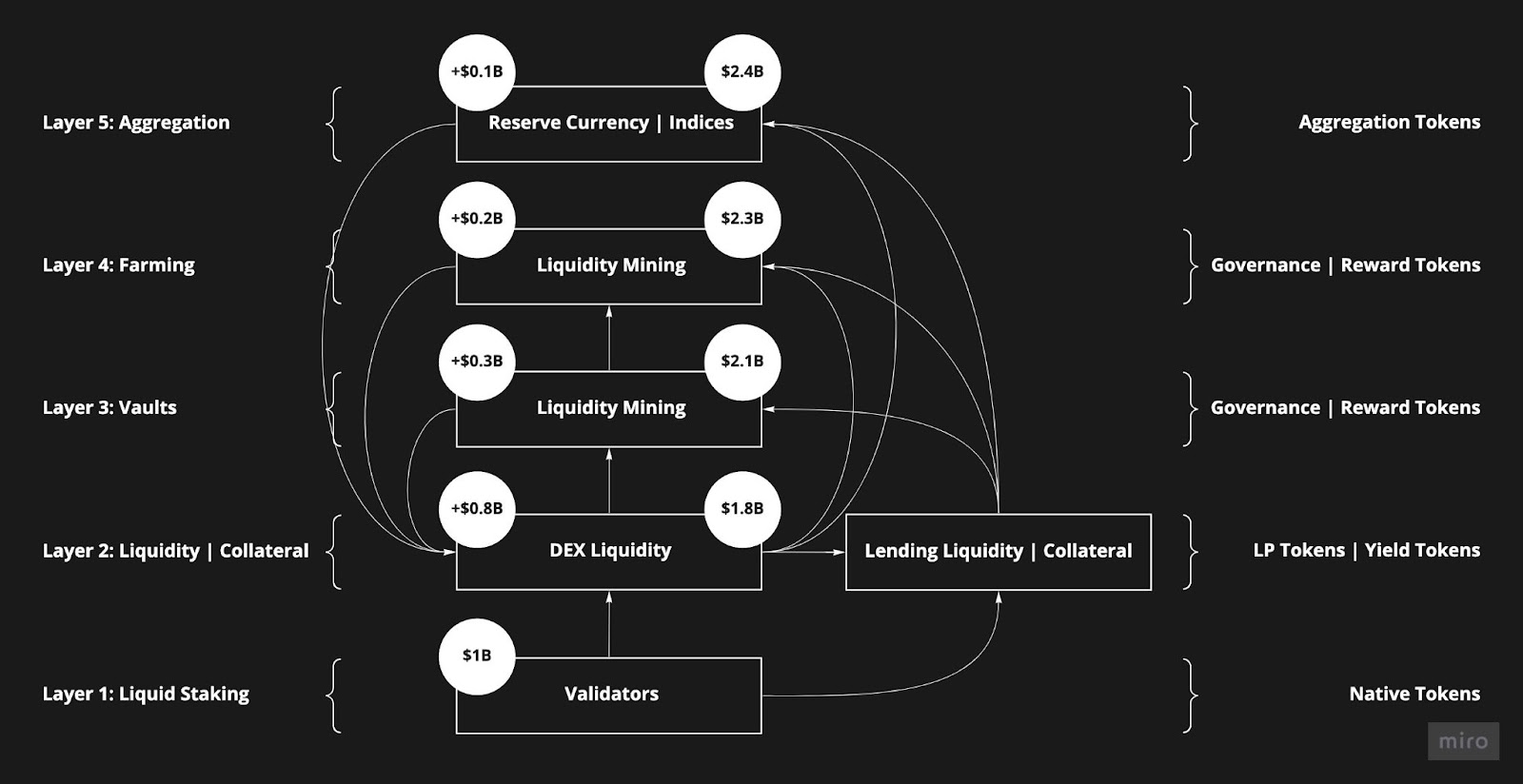 Ankr will soon launch their BNB liquid staking token on the BSC network, and has the potential to draw billions of staked BNB. Leading liquid staking providers like Lido hold liquidity in the billions, and while many are Ethereum-focused, Venus accepts ETH as collateral and can participate in the leveraging of validator-staked native tokens to provide capital efficiency to the DeFi ecosystem.

Liquid staking will boost borrowing demand for BNB, MATIC, ETH, DOT, etc. because as long as borrowing interest of these tokens is below liquid staking rewards, users will be incentivized to borrow BNB or ETH at a lower rate than its staking rewards. If ETH or BNB borrowing interest is higher on Venus than other lending platforms, users will be incentivized to provide ETH/BNB lending supply on Venus instead of other lending platforms.

Validator staking is a large market, with over $13 billion already staked and needing additional DeFi use cases to increase capital efficiency. TVL gains from this market could be $2 billion or more.

Although liquid staking tokens are intended to match the price of the underlying asset, actual prices can differ due to:

The method used to determine staking rewards can directly change the value of the liquid staking token, but often this process is not straight-forward. For example, Ankr’s liquid staking tokens rely on a series of updates to the token valuation ratio, and this delay can cause unexpected price fluctuations. 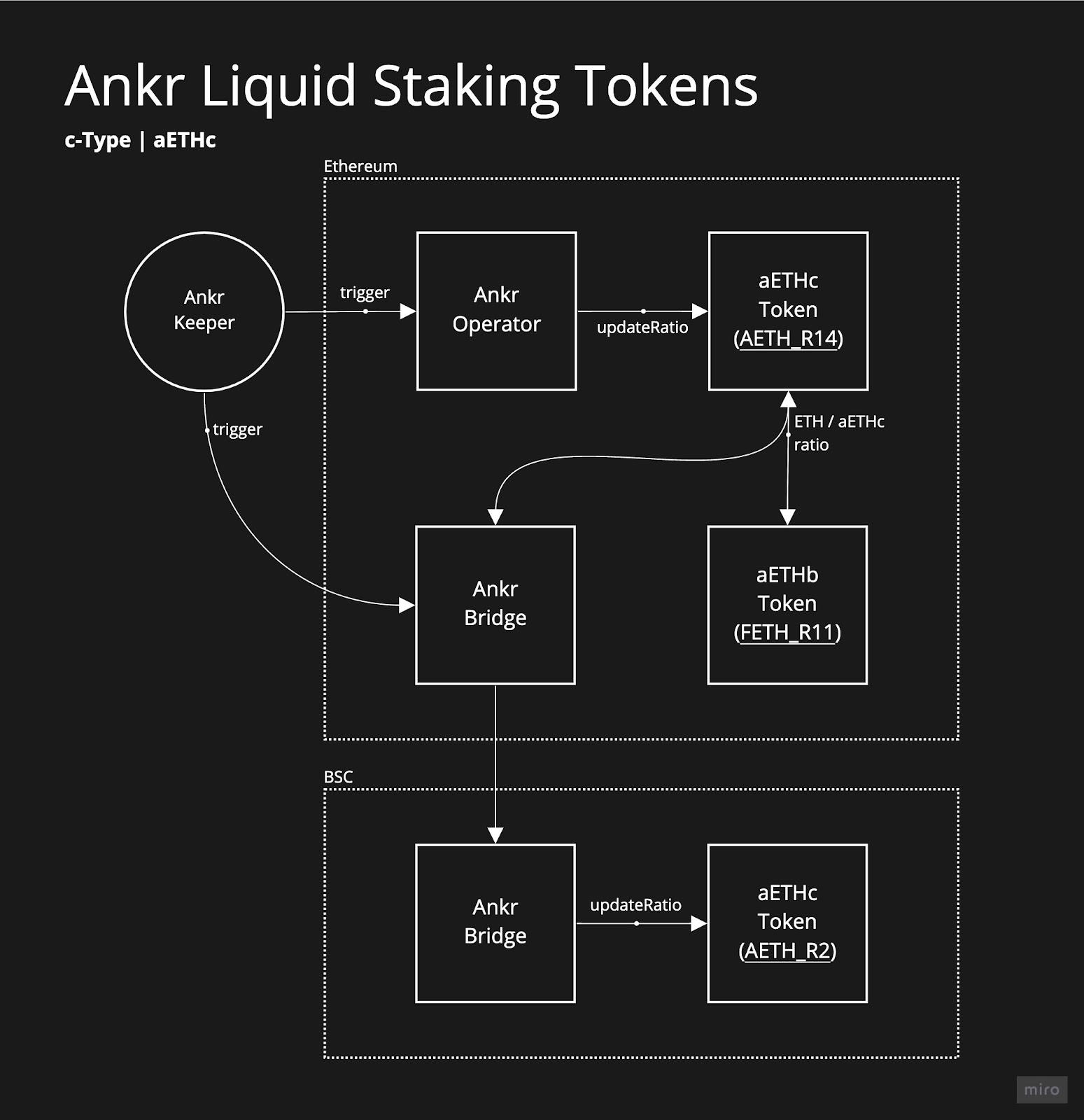 The unstake wait period can also cause price fluctuations. When staking for Eth2, tokens cannot be unstaked, so high levels of liquidity are required to make liquid staking work for Eth2 validation. However, BSC validator staking only requires a 7-day unstake waiting period, leading to the staked BNB price remaining close to the market BNB price. However, even this minor delay can cause supply and demand to not match and cause short-term price changes.

Because of the redeem ratio update delay and unstake waiting period, the Venus security team recommends that liquid staking tokens rely on a market-driven oracle rather than assume the price of the underlying asset.

Ankr is a decentralized Web3 Infrastructure provider providing decentralized API solutions on 11 networks based on a distributed network of RPC nodes, as well as a liquid staking solutions.

Ankr was a pioneer in the Liquid Staking industry by creating ETH Liquid Staking in December 2020, providing a solution to the capital inefficiency of Proof-of-stake and liquidity solutions for ETH stakers.

Liquid Staking became one of the most popular products in DeFi and Ankr has been expanding to other chains such as Avalanche, Polygon, and Polkadot. In February 2022, Ankr will launch BNB as well as FTM Liquid Staking.

to be bridged between Ethereum and BSC.

aMATICb and aDOTb are currently available on Ethereum, which is used as the main settlement layer for both liquid staking solutions (MATIC staked happens on Ethereum, Polkadot has several Parachains that did not reach strong adoption).

Chainlink oracles will not be available for liquid staked BNB for some time, and not all staked ETH types have Chainlink oracles available. Therefore, it is necessary to use a TWAP-style oracle for price updates.

The Venus team is undergoing analysis to determine the correct structure of the TWAP oracle.

Current vTokens in Venus represent fixed-quantity underlying assets. From the vToken holders’ perspective, the amount of underlying collateral is easily known through the vToken balance.

However, aBNBb and aETHb tokens are rebasing tokens, with the balances regularly increasing as stakers earn rewards from the validation process in their underlying asset (BNB or ETH). As these collateral balances change, so should the vToken balances to represent the rewards gained.

This vToken design is new to Venus, and will need to be architected and developed as part of the Ankr Liquid Staking implementation.

What additional Liquid Staking assets are you most interested in seeing collateralized on Venus?

BNB and ETH to start

This sounds pretty exciting. looking forward to seeing all of your liquid staking assets on Venus

This proposal sounds fantastic and very exciting. I adhere to the recommendation of the team to use market-drive oracles for the price of the liquidity staking token, as well as to use TWAP-style oracles for the time being.

Thank you to Ankr for bringing this timely proposal forward. Really looking forward to getting thit to vote and seeing this one come to life out in the wild along with all the future things that can be done to support and expand liquid staking down the road. This is just the beginning.

This post was flagged by the community and is temporarily hidden.