Which of these hyper inflationary currencies is VAI trying to peg themselves too? The VAI money printer is going wild!

Volume has all but dried up on the trading pairs, indicating a lack of interest and an inherent market believe that this project has failed and should be avoided.

They don’t have to do a buyback, just add an interest curve to it. And it will be solved.
Hopefully they are working on it.

Maybe they should just stop printing and dumping on the market. One address printed $50 million this week.

Stop spreading this FUD.
its the 3rd time you come up with this nonsense…
Last time at least you provided a tx id to check…
When I did I saw nothing was printed, but regularly minted - and staked in the VAI vault.
So either stfu or provide tx ids…

The concern is for VAI holders (not minters) who now have coins with value to low to be sold (we’re at all-time low), a ridiculous yield and no place to use it as collateral. Not in Venus itself, and Cream has a 0% collateral factor with negligible amounts for VAI.

Btw, while I understand who mints and who stakes, I can’t get those who actually sell for $0.8
If one minted, he’ll have to buy it back, potentially for more, in theory for $1, and he could better just borrow BUSD
If one bought, so he bought for more since we’re at all-time low, and selling would cause a loss.
So, who sells? Why?

Except for the Vault, free-floating VAI is mostly in Pancake, in Binance CEX, in Biswap, and some more in Acryptos, Wault and Pantherswap.
Acryptos staking forwards to the Vault, so I don’t include it on purpose. Other like SwipeSwap are negligible.

The issue can be fixed simply by enabling the Stability Fee from DAI, which VAI is an explicit clone of. The code already exists in DAI git and the fees would go to the devs. Free and legit money by copy-pasting existing code, what are they waiting for?
Otherwise they could lower the VAI mint factor to force minters to buy back, like they did for XVS borrowers.

I am a fellow VAI holder, like you. My VAI was not minted, so I am in the same boat.
And I am really fed up with VAI dropping from peg and the ridiculous 1.9x% staking rewards.

And I also wonder who the guys are that are selling for 0.80 and below.

So I just hope that this situation is taken care of before the end of september when the new XVS vault is introduced or whatever else issue that is deemed more important.

Yes, take vai mint limit to %30
Decrease it every week until %10
Force borrowers to payback
Fix the code add interest curve
Than back to %60 mint limit
Simple! DEVS ARE DUMB!

Are you a dev? Provide proof of the $300 million in collateral used.

Of course I am a dev… and here is my photoshop’ed proof.
And to make it more believable I hacked yieldwatch, so if you enter the address yourself, you will see the exact same picture! muhaaaahaaaaa 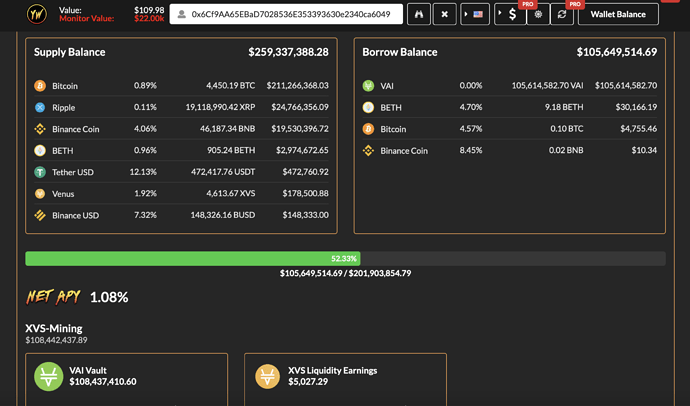 Could you point our poor souls to that venus insider report and those txids there proof of dev adress selling? I’m too dumb to find them by myself.

The whale Hiromatsu shows the account of has staked, not sold.
Previously I stated the VAI would bring him a few extra yield, but for his BTC, that’s quite tripling the yield.

At least @fat sustained flow of rants made the devs evoke the VAI case, in their last report:

In addition, we have also paid attention to the problems of Venus’ stable coin system.

Thanks, a 20% drop on a 200M TLV stablecoin is worth paying attention.
Not directly related: I understand they rush to remove the XVS borrowing feature, a total nonsense from day one, it’s normal you pay in token X to stake token X, like CAKE, BUNNY… but not you pay X to borrow X. Of course someone would borrow maximum and keep them forever. And this is exactly what happened.

But other issues are low priority. VRT? We all got them for free with an airdrop. I’ve some VRT and I don’t care their price, since I got them for free. And XVS price is very decent, it’s only 4x lower than all-time-high, the same as CAKE, and far better than BUNNY (600->10) and many other.
Of course those who bought them @140 are angry, but hey, that’s trading. Venus specs doesn’t define any price for XVS or VRT, but it defines VAI price at 1. Unpegged VAI is a break of the Whitepaper rules, this is urgent.

@Jmn
Thanks again! I did not dare to ask about the insider report, because I wasn’t able to find it by myself, too…

I don’t think that fats sustained flow of rants made the devs aware of this topic, alone - but of course it may have helped the issue.

And I completly agree: Fixing VAI is URGENT and a break of the Whitepaper rules

Not explicitly bought: he previously provided VAI Liquidity in Swaps (Pancake, Wault…) and the extra 3M is actually a consequence impermanent loss due to the fall of VAI. He paired and received more VAI (and less BUSD and WBNB) than deposited.
Example: Wault Pair tx

update: I also checked for the Venus treasury where the VAI mint fees went (when they existed) and they sold nothing.

You need pro access for that. you have $2.5 mill in watch tokens?

We just broke the $0.8 (reciprocal: 1.25 VAI to the dollar). All time low, even during crypto storms.
The main cause is that guy: 0x7197809Db3Abf2Bc1Dc9A90D271C3406BA15cEEE
He’s a holder (not a minter, not a contract, and not me) who bought VAI big for one month with an average like 0.84, and he decided to sell at 0.80 today. Either he knows something, or prepares cash to enjoy a super deal elsewhere, but at least this is a legit move, yet hard to understand.

Venus stats are all free on YieldWatch. You may try venus.finance also, in case you’re dubious. This wallet is legit and a 260M Venus investor. Also as a VAI minter and staker, he’s agnostic to the price.
VAI impacters are swapers on Pancake and Binance CEX. Minters+Stakers are not, they just get free XVS with no exposure.

The devs are discussing solutions for VAI. I’d advise:

Well I didn’t get that view and it told me I needed a lot more than $100 to view Binance smart chain as that is a pro feature.

Noticed Venus is greyed out. 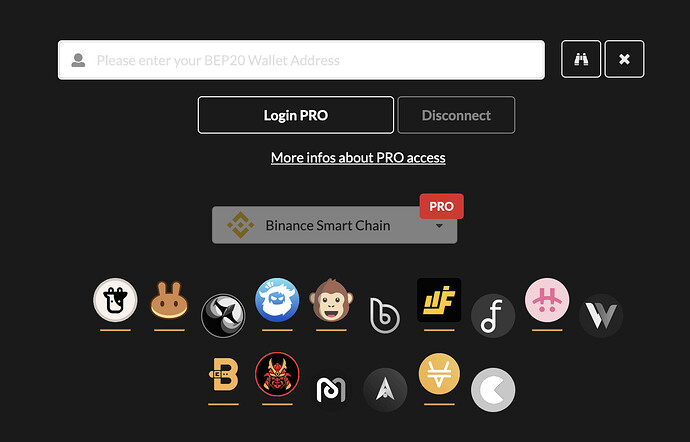 interesting…
I don’t get those guys… perhaps he is hoping to create some kind of panic selling and accumulate more VAI? Who knows…
Just hoping this mess will get adressed soon.

Could you explain how the stability fee works (in a nutshell)?
Is it like a curved model… increasing the fee if DAI is more away from peg?