Wormhole is excited to put forth its proposal in enabling cross-chain lending and borrowing. The Wormhole team has already built out a reference example for Venus and is committed to helping build out the full solution while providing on-going product and smart contract support to Venus and its community. (Github)

Before that, a quick intro to Wormhole — Wormhole is the leading cross-chain interoperability protocol, allowing generic messaging over 15 heterogenous blockchains and soon to be many more. As a matter of fact, we’ve just announced our launch on Aptos devnet.

Since launch on mainnet in August 2021, 1.2 million messages have been transmitted. Some are regular messages (e.g. Pyth oracle data), some are token bridges, and all usage has come organically — no incentives.

Venus is a cornerstone project to the BNB ecosystem. We believe Wormhole is the best cross-chain solution for Venus for 3 key reasons:

Design quality matters a lot. There are a number of important details that determine the dynamics of cross-chain borrow-lend; thinking through and laying out these details beforehand is vital for any quality integration proposal. Wormhole has spent many cycles thinking about this breed of cross-chain application, and we foresee several different options that trade off between complexity and functionality.

The status quo is straightforward: for nearly all borrow-lend protocols, there are no cross-chain capabilities. Each chain is isolated, and users who want to borrow and lend across different blockchains have to manage and monitor separate balances on different contracts and protocols. The borrower in the scenario below is unable to deposit ETH on Ethereum and borrow SOL from Solana.

How can Venus go cross-chain? There are a number of possibilities and the Wormhole team is open to collaborating with Venus to develop sequential rollouts or target the development of the most-complex implementation from the get-go. We suggest leaving this decision to XVS holders and encourage Venus delegates to debate the merits of each approach. There are two main variants: single-chain and multi-chain vaults. 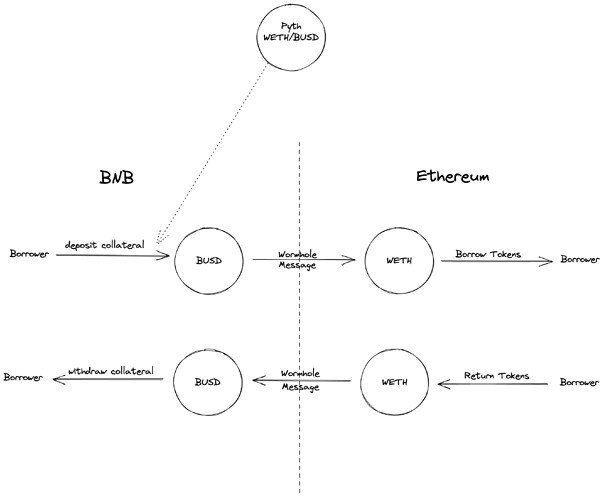 Moving to a more sophisticated rendition — a borrower may seek to deposit two or more separate forms of collateral on two or more distinct chains. Here we have multi-chain collateral pools on any supported chain allowing users to borrow on one designated chain. Users would repay the loan on the designated borrow chain and then withdrawal each form of collateral on their respective chains. We illustrate the workflow below. 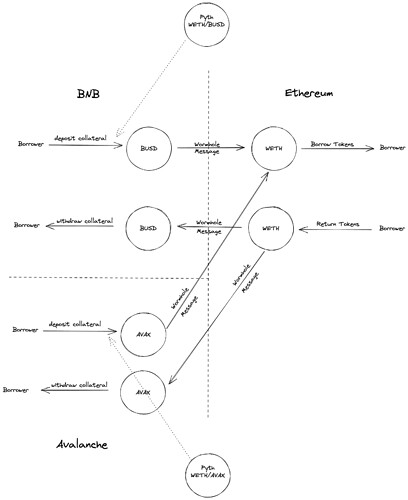 Case two introduces additional complexity into the design as we now have to synchronize between more than two chains. Borrowers could borrow from one designated chain while supplying collateral on heterogenous chains. Here we only need to account for the collateral supplied on all other chains on the selected chain that users are borrowing assets on, but every other chain just needs to keep track of the collateral supplied on its respective chain. The user would then initiate the borrowing on each borrow chain, breaking up the borrower’s total loan on a per-collateral basis. This design allows us to maintain liquidations on each borrower chain as the liquidator could check if the ratio of collateral on that chain to the amount borrowed originating from that chain is below the liquidation ratio.

We provide a reference example for how the single-chain vaults could work with BNB and Ethereum. (Please note that this is a lightly tested proof-of-concept and should not be used in production). We allow for 1 ERC-20 token to be used as collateral on BNB and another ERC-20 token to be borrowed on Ethereum and vice-versa. This design could then be adapted to integrate with the existing Venus codebase.

In our example, a user can deposit BUSD on BNB as collateral and borrow WETH on Ethereum using the following functions:

The user could then repay the WETH loan on Ethereum and get their BUSD collateral back on BNB as follows:

Although we do not implement liquidations in our reference example (we do provide an example workflow), the liquidator would:

Venus could potentially integrate Wormhole with the following additions to the codebase:

Wormhole relies on a PoA consensus with 19 guardians. Each guardian runs their own node for each chain and holds equal weight in governance and voting. Of the 19 guardians, Wormhole requires more than two-thirds to reach consensus and pass verification—thus, we assume that at least one-third of our guardian set is honest. Our guardian set is comprised of the leading PoS validators with billions in active delegations across the biggest PoS chains — P2P, Chorus One, Everstake, Staked.us to name a few.

However, despite Wormhole’s high degree of decentralization, we remain resolute on improving our trust assumptions — as such, we are placing heavy investments in moving towards a completely trustless system based on zero knowledge proofs.

In just the last 90-days alone, Wormhole has transmitted over 300k messages. Wormhole has handled some of the recent volatile periods in DeFi with ease, facilitating 44k messages in just one day. Our tried and tested permissionless protocol has gained the trust of some of the most reputable developers in the space.

Finally, we recognize that Wormhole has earned some press for the hack in February of this year —we believe Wormhole is stronger for it. Wormhole, for instance, has the most generous bug bounty programs in crypto—over $10 million and counting— including 5 quality audits (e.g., Neodyme, Kudelski, Ottersec) of its full codebase (audits by Certik, Trail of Bits, etc. underway). Wormhole will continue along both of these fronts so as to uphold high standards of security for its users and protocols across supported ecosystems.

Venus will soon integrate with Pyth to provide high-quality price data to its price feeds and ensure timely and precise liquidations. Because Pyth on BNB involves streaming prices from Pythnet via Wormhole, that integration would already create a downstream integration between Venus and Wormhole. With this dependency in place, it makes sense to use Wormhole for other elements of Venus’ cross-chain goals, including cross-chain borrow-lend. Besides removing the need for a different set of bridge trust assumptions, Wormhole integration could also streamline future maintenance of the oracle mechanism, as the the fundamental interoperability requirements would govern both the oracle and the cross-chain messaging.

We look forward to engaging with the Venus community on our proposal.

Hello guys. Thanks for proposal.

Please explain in details about fees. For example when user has ETH and wants to borrow SOL.
In which currency should he pay a fee?

Also which prices do you use for ETH/SOL? Is it a basket of index prices from different exchanges or smth else?

Hello, Your proposal is very well made, but a newbie may not understand it.

What do you think is your biggest advantage with regard to the competitive proposal from LayerZero?

Thank you for all of your questions, please see our responses below and let us know if you have any questions!

Please explain in details about fees. For example when user has ETH and wants to borrow SOL. In which currency should he pay a fee? Also which prices do you use for ETH/SOL? Is it a basket of index prices from different exchanges or smth else? (@quest)

What do you think is your biggest advantage with regard to the competitive proposal from LayerZero? (@wonderomg)

There are over 60 projects building on Wormhole (full list wormhole.c om/ecosystem/) and we’re particularly excited to share a few examples here (not endorsements or recommendations).

Nexa – is a totally new type of application made possible by Wormhole. Its novel xMint technology enables cross-chain token sales allowing for any assets (e.g., tokens or NFTs) to be created on multiple blockchains making the user flow seamless by eliminating the need to set up multiple wallets for every chain. They initially plan to support 7 chains (ETH, BNB, SOL, Polygon, AVAX, Fantom and Oasis) and aim to launch on November 1st.

Magpie – is building a cross-chain infrastructure and protocol that offers a simple and efficient way to participate in DeFi. Magpie uses Wormhole to communicate swap signals between chains acting as the primary data transfer layer. They plan to initially support 4 chains (Ethereum, Polygon, Avalanche and BNB) but plan to support more in the future. Makes it seamless to swap tokens natively from chain to chain without having to manually bridge and swap on a DEX.