Could be VAI next if the project doesn’t shape up.

Can tick quite a lot of items off on that list, if the project can’t maintain the peg then I have little confidence in it.

Here are some that drive whether we decide to delist a digital asset:

How many dyslexic VAI investor did you kill with that post?
Or maybe you’re one of them according to the acronym you used previously (V.I.A.)

Fun fact, I still don’t understand why some failures like BURGER are still listed, while successes like BELT aren’t.

Looks like the Next Launchpad project on Binance is causing people to dump VAI.

It looks like it might be the same price as VIA in the next couple of days at this rate.

I have seen the same thing. To be fair they did try to get it back 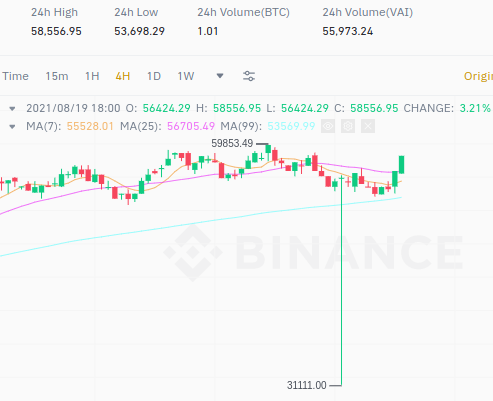 What made it worse is that the new dev team has not any plan about VAI which would speed the VAI dropping.

They don’t seem to know what they’re doing in general, I am very nervous about investing any funds into the project. If they can’t maintain the peg then I doubt they can protect my funds.

With such a discount (we’re at a new all-time-low every day, ~0.78 today) I’m no longer thinking about the VAI ecosystem or the future of Venus, rather about how a solid Overcollateralized stablecoin can plunge so hard.
It’s normal bDollar is woth $0.05, it’s backed by nothing, but VAI actually is overcollateralized, so even with a 0% stability fee, it’s shouldn’t be that far of peg. Even when it had been discovered VAI were not liquidable, in Q1 2021, it weren’t <$0.8 and the lack of liquidation were the one big danger.
Now liquidation is working, and VAI as a borrow is always valuated as 1.00 so it would make VAI slightly floating, but not plunging by 25%.
Even that obscure WUSD from Wault, which had been hacked, is still worth $0.95
Same for BeltBUSD, badly hacked for 60M and still worth $0.81, more than VAI

People can mint for free follow the trend buy it back later at a profit. If they use a trailing stop loss then they can even feel relatively safe doing this.

The trend is your friend and it looks like one way traffic at the moment.

I’ve only seen one small line on a post expressing any concern about the peg, I think a twitter or blog post could go a long way to reverse the trend.

Millions of VAI buys a few minutes ago… are we on a positive trend again?

A better place for this post: the actual VAI has had one of the two pairs delisted: BTC/VAI
@fat: wise